Read The Rise of Donald Trump is a Terrifying Moment in American Politics, written by Ezra Klein for Vox. On his FB page Mr. Klein wrote:

This is the harshest thing I have ever written about a major American politician. But I think it’s deserved.

Boy howdy yes, on both counts!

Stay tuned for more, this weekend, about the stay —. Lyle Denniston has the goods in Carbon Pollution Controls Put on Hold. This weekend? Jefferson Wins … and We’re Effed!

So what’s the fuss? An activist group of Supreme Court justices—five, to be exact (Roberts, Scalia, Kennedy, Thomas, and Alito)—stayed a set of regulations which were approved by a U.S. District Court judge and awaiting appellate review in the D.C. Circuit. No one can recall a situation like this one having ever occurred. (An activist Court? Yes. Another example? Citizens United v. FCC, No. 08-205, where the same five justices expanded the scope of the litigation after all lower court proceedings had ended, deciding issues being litigated for the first time before the Court.)

I command you to read Elizabeth Drew’s New York Review of Books review of the American Society of Civil Engineer’s 2013 Report Card and four books about American infrastructure, A Country Breaking Down. Just kidding, really, and if you’d rather read the Report Card and the 1214 book pages, go for it. Ms. Drew elegantly demonstrates just how badly we blew a chance to rebuild America and, in doing so, put people back to work. (By the way, we could have financed this whole thing at record low borrowing rates.) Ideology—government fails—stole this opportunity, and it’s a crying shame!

Slate offers up A Conversation with The New York Times’ A.O. Scott. Criticism is a subject that is always worthy of consideration, and film is a realm in which criticism matters greatly. Critics don’t often expose themselves as openly as Anthony Oliver Scott has here.

Kossar’s Bagels and Bialys has reopened at 367 Grand St. That’s on the Lower East Side of Manhattan, just in case you were looking for it on your local map. In honor of the reopening—after renovations—I share with you a platter of my own bialys: 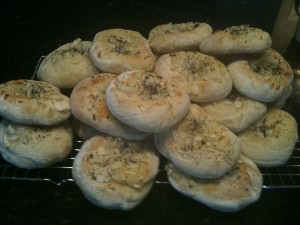 I’ve eaten Peruvian food only a few times, but always with much pleasure. So here’s Pete Wells for the New York Times on February 9, reviewing Llama Inn. And, from Shauna Lyon for the New Yorker on January 29, here’s Llama Inn.

The Curator ought to offer a lagniappe more often. From the “good to know” department, and courtesy of Eliza Collins and Politico, read Carson: Being Trump’s VP a Possibility. Ah, the hubris!