The activist U.S. Supreme Court brought down the curtain on its shameful, disgraceful, truly mind-bendingly awful 2021-22 Term. Lots of bad, bad decisions: and many more that show a work-a-day Court that resolves complex disputes that get little attention.* Here are the highlights:

In New York Rifle & Pistol Association, Inc. v. Bruen, No. 20-843, the Supreme Court issued its 6-3 opinion, setting aside as unconstitutional a law in effect in New York for more than 100 years. It took the majority and three of its six Justices 77 pages to explain why that 100 year old law was unconstitutional.

The Second Amendment is an abomination as a drafted statement.

Daniel Patrick Moynihan was a good man. Wicked smart, funny, and he had a good heart! For all of that, though, he should be known most for one statement: Everyone is entitled to his own opinion, but not his own facts. (Senator Moynihan attributed the quote to Alan Greenspan and James Schlesinger may have beaten both of them to the uttered insight.)

The quote deserves consideration as we steep ourselves in January 6, 2021 matters. As of Friday, June 17 – the 50th anniversary of the Watergate break-in, by the way – we know most of Donald Trump’s advisers knew there was No. There. There. No fraud that might come close to changing

Thank you, Donald Trump. Thank you for your nonsensical response to the, so far, proceedings of the Select Committee to Investigate the January 6th Attack on the United States Capitol. Thanks, also, for being the ignorant fool who tried to break us … and failed. Thanks, too, for serving as the canary in the coal mine, letting us see clearly who we are and what the future might offer. (Personally, I say thank you, for that 12 page response sparked the thoughts that allowed me to write this piece..)

Mr. Trump and those who still slavishly adore him tell us we should focus on inflation. Baby formula. Mental health. (No guns, pretty

Y’all don’t here from me very often. I learned “if you don’t have something nice to say, be quiet” early on … but, in 2022 and for the past several years, “nothing new to say” has guided me. If writers who get paid to offer their opinions share what I would have written, no one needs to be hearing from me.

Tonight, I am pleased and angry. So, so angry, but pleased first.

Tonight, I am pleased and angry. Pleased first. G-d bless Geogia Rs for choosing Brad Raffensperger as their nominee to serve another term as Secretary of State in Georgia. Voting matters more than anything else in our system. Not so much, on any of this, the war in Europe. I am 64. I know I’m missing many wars, but I have lived through American military battles in Vietnam (and neighboring countries), the Dominican Republic, Grenada, Iraq (2X), and Afghanistan. Obviously, my home-focused view ignores the suffering around the globe that hasn’t 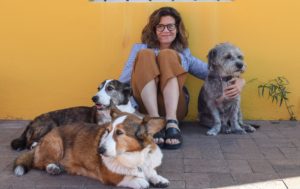 Leigh and (front to back) June Carter, Ozzie Smith, and Max Atticus Finch

Ozzie Smith – not Osbourne Earl Smith aka Ozzie Smith, the baseball player for whom Leigh Bernstein named her boy Corgi many years ago – died a few minutes before 9:00 a.m. on February 9, 2022. Our – Leigh’s and my – sadness has not found its bottom.

When Leigh and I started Rubin & Bernstein PLLC on April 1, 2018, our Canine Corps included two Corgis, June Carter and Ozzie Smith, and a Schnauzer / Terrier mix, Max Atticus Finch. Less than four years later, June and Ozzie have passed. Max heads up the Doggie Department now, with no real prep

I don’t get angry often. No, really, I don’t. Pissed and quick-triggered, sure, but really angry. Nah!

On January 26, word slipped that Associate Justice Stephen Breyer intended to retire. The following day, Justice Breyer notified the president that he will leave the Court at the end of the 2022 Term. Of course, his departure assumes a successor gets nominated and confirmed.

Then former Vice President Joe Biden told us he would nominate a Black woman to the Supreme Court if we picked him. We did. He will.

Of course, confirming those intentions brought out the naysayers. I like, best, Senator Roger Wicker, (R – Miss.), who said, on January 28: ‘The

A father told his seven-year-old son he could ride his bike to school. The father explained to his young son that along with the privilege of riding the bike to school he would have to assume some responsibilities. A few of these were: keeping the bike in good condition, keeping it locked, and obeying all the safety rules. The young son then reconsidered riding to school, in view of all the responsibilities he would have to accept.

We as American citizens must accept the fact that we are in the same relative position as the seven-year-old boy. We have many privileges in America. Some of these are freedom

Let’s be clear: the U.S. Supreme Court has not ruled in NFIB v. OSHA, No. 21A244 and Biden v. Missouri, No. 21A240. Pigs might fly, too – like the one who lives in the wooden frame on the wall in my family room – and and the Court might uphold the OSHA and Centers for Medicare and Medicaid Services regulations. (Leigh’s known the pig longer than I have – polite-speak for, It’s hers – and she assures me, from time to time, that it’s not a photo.) Senator Reid was Barack Obama’s core. He told him he needed to run for president. When he ran and won, he got the