40,802 steps, on Saturday.* Yep, you read that right! Everybody approaches a new city differently. I got many “Do the bus tour” commands. Old friends FF and GF brought their Rick Steves guidebooks, along with leftover money and Oyster cards, and a strong recommendation for ear buds and the Steves’ app on my phone. (I read the books before I left. Very helpful! I wish I could figure out how to use the wireless headphones I bought, so I would be prepared for a virtual tour.) From others I got “see this” and “you must see that.” Spoiler alert, and I do feel like a failure, really: never got to Harrods.

Alas, I walked. It’s my M.O. in any city with sidewalks. I love the rhythms, along with the sites, smells, and sounds. The Walrus and the Carpenter Pub After my morning meanderings, I had to return to Trinity Court. Phones suck up lots of battery with the locator running, and Google Maps likes to know where I am. In addition, I’d decided I was going to have an afternoon martini at Dukes Bar in Mayfair, where the dress code calls for “smart, casual.”

Recharged, in many ways, I set out for Dukes. I got to 1 St. James St., where I wandered into Dunhill Tobacco of London Limited, in search of No. 35. Channeling Omar from Supreme Fried Chicken, I thought about just having a Cuban cigar and calling it an afternoon. Alas, after a brief Cubano inspection—₤100 and up—I got directions to 35 St. James Pl., and Dukes.

Allegedly, Ian Fleming used the words “shaken, not stirred” in connection with a martini at Dukes. Me? Stirred, please, and while I enjoyed my martini immensely, ₤19.50 stretches my drinks budget to the max. (The ritual involved a trolley cart, gin from a frozen bottle, a rind peeler, and some cool “twist” action.) Here’s a petraptych, highlighting my visit: 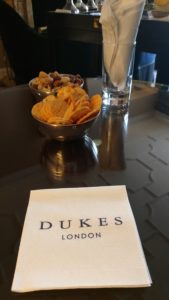 From Dukes I wandered over to the National Gallery of Art for a couple of hours. Not nearly enough time. Then, the National Portrait Gallery for a bit. Then back to Trinity Court for phone recharging. Tired yet? Not me, y’all. And for your brief viewing pleasure (and a touch of amusement from Sir Paul): You’ll note, perhaps, that I have not mention breakfast or lunch. I did eat breakfast once on my trip, the morning after we returned from Oxford. (LB insisted on my having an English breakfast, once. Done, … and we got a kick out of the lukewarm, canned Heinz Baked Beanz.) As for lunches, stay tuned, but I can only report on the two sandwiches we shared during our five days together. Why? But for fruit here and there, nothing else came close to being called “lunch.”

Bottom line? I eat one meal a day when I travel. So, by early Saturday evening I was hungry, and I was ready for fish and chips.

The Blackfriar Pub was my choice. Unfortunately, many others made the same choice … before me. I had reserve spots, seen along the way, but none of them seemed even passable from inside. Then I found The Clerk and Well. Lovely, delicious, and reasonable. Sunday morning found me up not quite so early—after an evening spent tossing and turning—and perambulating south and west to the Tate Britain. Soon before my arrival I got a message, telling me we had tickets to see the David Hockney exhibition on Thursday afternoon. So, scratch the Britain for the moment; off, instead to the Tate Modern. Lovely it is, and manageable. Oh, and they serve martinis. The Back Series (1)
Henri Matisse The Back Series (2)
Henri Matisse The Back Series (3)
Henri Matisse The Back Series (4)
Henri Matisse After the Tate Modern I wandered through the British Museum again, having forgotten to see the Rosetta Stone. (Hey, I was just off a plane a couple of hours earlier when I visited for the first time.) Amazing! The foresight to provide text from the hieroglyphic and Demotic scripts, and then a translation to Ancient Greek. (And, a couple of millennia later, we have an effing moron running the Free World. By the way, and I’ll share more on this particular topic soon, our friends in the U.K. and elsewhere are laughing at us … and a wee bit fearful.) [Technical difficulties make a photo of the Rosetta Stone unavailable.]

Back to Trinity Court for the last time. Packed up, I took the Underground to Piccadilly Circus and the evening’s hotel. LB arrived a bit later, we caught up, wandered off in search of fish and chips, got shut out at least once, and ended up with a credible, shared serving in an unmemorable central London pub.

2 Responses to London—Saturday and Sunday