From the Republican campaign desk—aka, according to many, the Clown Car—here are two fine pieces from The Atlantic. First up? What Happened to Carly Fiorina? by David Graham. Then there’s 1,001 Times the Media Acted Shocked That Trump Was Running a Real Campaign by Molly Ball. Big takeaways? Media matters greatly in the Republican race, and Ms. Fiorina has not mastered the game. And, and this one surprised me greatly, we’d best not sell Mr. Trump short. Apparently, while he’s playing the media game, he’s building a strong, sophisticated organization. I’m more impressed than I expected to be!

And from the other side, John Cassidy has written a fine assessment of the 2016 version of Hamlet, The Task Facing Joe Biden for the New Yorker. I characterize Vice President Biden without any intent to mock, criticize, or be contemptuous, for he has a lot on his plate, to put it mildly. Unfortunately, presidential races wait for no one, and with the general election a mere 384 days away, it’s hard not to think Joey’s Amtrak left the station … without him.

Then there’s President Obama & Marilynne Robinson: A Conversation in Iowa, also for the November 5 issues of the New York Review of Books. The interviewer for this fascinating exchange is the guy who will be in charge of our country for another 457 days, and his subject is Marilynne Robinson. Their subject? Religion in America, and lots more. If you read one piece I’ve linked to in the past few months, read this one, both for its subject matter and depth, and because it reflects a man in the White House who is simply not tied up in conventions associated with the office.

Here’s the second part of Elizabeth Drew’s report on the P5+1-Iran Deal, Can They Undermine the Deal? Written for the November 5 issue of the New York Review of Books, it focuses on what Israel wants/may get, so that supporters will feel marginally less bad—or not—about the deal. I got lost more than once, but the piece is a reminder that getting from A to Z in Washington does not require any knowledge of the alphabet.

I so enjoyed Riding the Slow Boat to the Delaware River’s Floating Hot Dog Stand by Marguerite Preston for SeriousEats.com. Ms. Preston shares the story of a floating hot dog stand—duh! Rite Anyway, when I read the piece I got all verklempt about my country.

Danny Meyer is one of my business heroes. He runs first-rate restaurants, with a total focus on the customer experience by, get this, focusing on his employees. Imagine, believing your customers will benefit from your investment in and support for the people who deliver your product or service. Read Pete Wells’ article, Danny Meyer Restaurants to Eliminate Tipping, from the October 14 New York Times. One smart, classy operator, is Mr. Meyer.

Finally, I haven’t been to San Diego since last winter. barleymash’s ahi salad is calling me. Soon, soon, I’m responding. 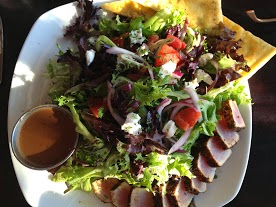