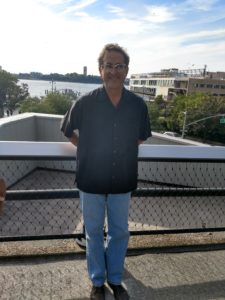 September 14 arrived as most days do. Early. There must be some Upper Midwest stock in me, for I live a little like a Norwegian Bachelor Farmer might. (Actually, nothing about me matches the link, but I rise early, I work hard, I go to bed early, and I’m not married. And I am planning a vegetable garden at my new home.)

Thursday rocked on. Lots of Facebook greetings, and I responded to all of them. At least I think—and hope—I did.

Facebook has its detractors. I understand some of the issues associated with FB, and I know many who don’t like it and other social media sites have their reasons. That’s fine! For me, my birthday provides a ready opportunity to connect with lots of people. “Thanks, —.” “Thank you —.” “Thanks, and best to you and —.” Etc. Why should anyone pass on the chance to touch 80-100 people?

Calls, aka real human contact? My daughter called first. Heard from my sisters. One of my aunts, and I saw another a week ago in New York. Closest friends called, emailed, or sent cards.

I did get some inquiries, in my office and from friends who called, about my celebratory plans. “I don’t know,” I said more than twice. My GF’s inquiry about where I wanted to go for dinner got suggestions. “Not special enough,” was her response to each of them.

At 3:15—there was an “I’m delayed” call—LB’s assistant arrives, with electric green paper in hand. In my hands, I read quickly. Scavenger hunt.

Off I go. Clue 1 takes me to an office in Barrio Viejo, for a Charles Addams siting, and my next clue. S O M E  P I G and more takes me to the Pima County Public Library, in search of an E.B. White biography. The next clue—you get the idea—takes me upstairs, to the The Thurber Carnival. Then off to Casa Video, with detours to retrieve my car, get Max, and drop Max off at home.

At Casa Video I find a Ruth Prawer Jhabvala movie, which ends up being Howards End. Next? The Himmel Park library. Clue? A lady with a family name you know well, and an ordinary taken name. With the literary theme it takes moments to confirm the fact that Dorothy Parker was born Dorothy Rothschild.

Final directions. Go to where Dorothy Parker would have had a drink in central Tucson. (And maybe did?) Alas, at 7 p.m. we’re ensconced in the Audubon Bar at the Arizona Inn for cocktails, a light dinner, and my way cool gift: the New Yorker issue dated September 14, 1957. Now, the New Yorker bears Monday dates. Apparently, 60 years ago, Saturdays ruled. What’re the odds that that week’s issue falls on my birth day? Actually, 7/1, from the magazine Duh! (Right?) In the issue? Pieces by the writers I went looking for, mostly. (The library and local bookstores have their limits.) Small print, too. Lots to read. (I’ll likely read the issue on line, to protect my gem. It’s not a reprint. That’s the wisdom which comes with being 60.)

And advertisements. Oh my gosh, a regular issue with 164 pages, many of them ad-only pages. The back cover? An ad for Parliament cigarettes, titled: Strike up a friendship with the new PARLIAMENT. Smoking, flirting couple, with a hound dog in the wash tub, lathered and ignored. And on page 101?

An ad for the all-new, all-electric THERMO-FAX “Secretary” Copying Machine. (Just imagine the excitement at the office when Betty’s new machine arrives. Under the cloud of smoke from the Parliaments, Winstons, and Pall Malls.)

On being 60? Meh on the marker. I’m healthy, I have plenty of energy, I like my work and my life, and none of my grandparents got close to 60 years. Life is good!

Note No. 1: Thanks to Ted B., Leigh’s brother, for his Lifeline services during the scavenger hunt. I’d still be at the Pima County Public Library without him.

Note No. 2: Those inquiries about where I wanted to go for dinner? Hooey!!!

Note No. 3: I published a piece a few days ago, and promptly pulled it. Published too soon. Apologies to subscribers, who got to a dead link. Stay tuned.

6 Responses to On Turning 60